Black Creek and the Pothole Caves of Lions Head

Tuesday found us back in the car driving; however, this was only a 10-minute drive west of Lion’s Head to a place called Black Creek Beach.
Not to be confused with the Black Creek area in GTA, this was a nice private beach with a dog section and a family section.
The quiet drive along the dirt road lead us to a parking lot and a small sign that said, Black Creek. 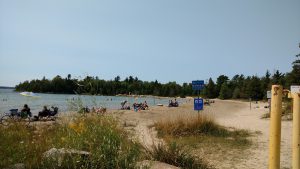 Eager to swim, the kids and I gathered up our snorkeling gear and ventured into the water only to find that the water was warm.
Up until this point in our trip, the water has been cold, but we would power through it.
For whatever reason this side of the peninsula the water was much warmer; not as clear but still worth it.

The sandy beach went out pretty far making it a good beach for kids; you would not have to worry about them getting too deep as there were several sandbars along the way out.

This tract of shore-land along Lake Huron, part of which is dominated by a beaver swamp, has a good beach for swimming.
Park Facilities and Activities A parking lot and toilets are the only visitor facilities.

Some of the kids made sand castles, and others were thrown about by the adults making a big splash in summer fun. 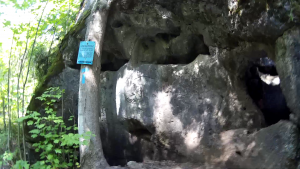 A quick break for lunch the trip saw us heading back to camp wanting more.

My two guys wanted to do a quick trip without some of the other families there, so we decided to power through the Lions Head Pothole trail. It took us just over an hour to complete the 5 kilometers track.

It was a nice day for a hike as we made our way to Lion’s Head Pot Hole Side Trail and the Giant’s Cauldron Side Trail to explore the Glacial outwash and eroded potholes that lie on top of the escarpment. 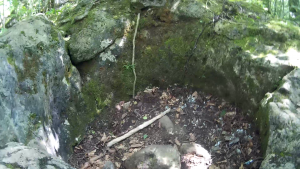 Knowing there was ice cream waiting for us back at camp we decided to call it a day and have another relaxing campfire. 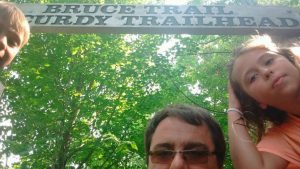 You can find the trail here on ViewRanger
http://my.viewranger.com/route/details/MTQ5MTU2OQ==

Clips of the Trail with commentary from my lovely daughter.

Devils Monument and the rocky beach

With the sun shining we decided to check my Bruce Trail mobile app and search for a cool trail to do with the kids. We found a spot with not too much details called Devils Monument

Finding our way to the Devil’s Monument side trail was an adventure in itself, heading down un paved country roads until we found our parking spot at the end of Borchardt Rd.

The main trail itself was one of the easiest on the trips, with only heading about a kilometer into the easily marked trail leading to a lookout.

Devil’s Monument, is a sea stack formed 5,500 years ago by glacial Lake Nipissing, an ancestor of Lake Huron when melt water covered most of the Bruce Peninsula. 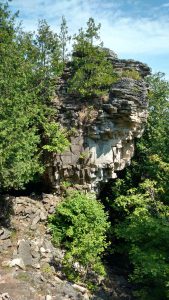 However, this is where the trail can become more difficult. there are stairs that just lead off to some rocks so you can climb down to the base of devils monument, and if you leave the trail to the left you will be rewarded with a neat little waterfall.

Since I had it with me, I was excited to use my Sawyer mini water filter for the first time from the waterfall, very simple to use and worth the buy from (http://a.co/6NYFj4j ) 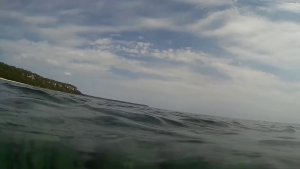 Following the trail from the waterfall keep heading down the hill. You will pass through some thick brush and find yourself at a clear blue rocky beach

The super clear rocky beach is worth a swim and is probably the best thing about devils monument trail. It is a hidden beach that a short climb down from the monument itself. Only handful of people from the trail made their way to the beach.

We spent an hour or so swimming and snorkeling these waters and even some time building cairns with the rocks on the beach. 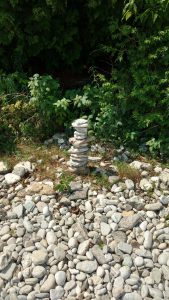 There was no way we were leaving without a rock skipping contests; the rocky beach supplied ample ammunition for our quest.

I saved the trail on my ViewRanger account, you can find it here
http://my.viewranger.com/route/details/MTQ5MDQ4NA==

After the hike with 2 sleeping (under 3) kids and 2 looking for more (over 8) kids, we decided to split 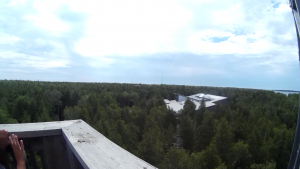 More information about the lookout tower and the visitors center can be found off of the Bruce website.

No clips for this day as most of the footage was taken by a child and it shows. 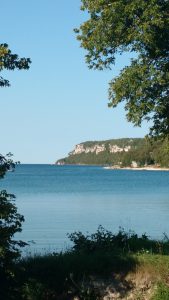 Sunday morning had us craving for a hike, so we packed up the car and drove 30 minutes south to Wiarton Ontario. We parked at the end of Bayview st and began our hike along the Bruce trail towards the rusted spiral staircase leading up The Corran Ruins where the kids ran through holes and explored the old building.

Now on top of the escarpment, we made our way back the way we came but only to stop at Spirit Rock lookout before returning to Bayview St.

Ths 6.12-kilometer walk took us around two and a half hours, but we did stop on the return to snorkel the rocks in Colopy’s Bay along the trail for something fun to do and a way to cool off.

The kids said goodbye to my wife as she heads back home to get ready for the work week while the three of us headed back for more adventure.

Shortly after a small nap back at camp, we met a woman who was getting her Kayak ready to launch who informed us of local secrets. That 20 feet off the shore in Lion’s head is a shipwreck.

Up until that point, the only shipwrecks I knew about were the ones in Tobermory, and I’m not the best swimmer in the world. 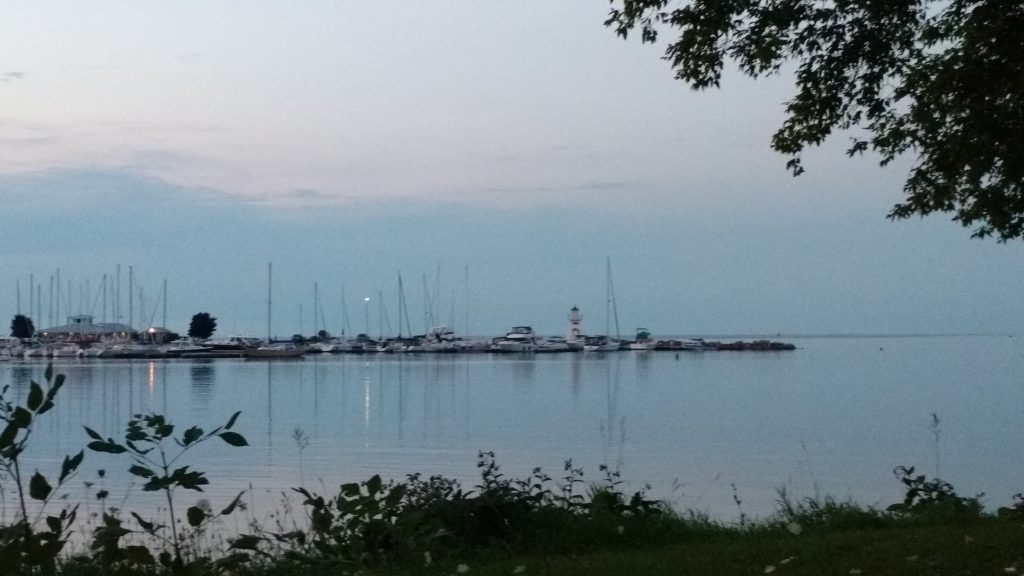 We strapped on our snorkel and swam out to the wreck. 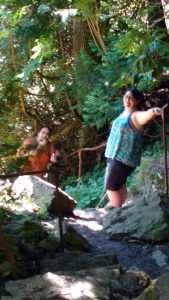 Rumor has it that during a storm in 1913 the Cyrenian (a schooner) was swept loose and blown across the harbor and it is still visible to this day.

The great thing about this wreck is its easy access for young kids to be able to swim to it, and the water in the harbor is so clear the wreck can also be seen from kayak or canoe

Tired from swimming and hiking, we made our way back to camp and made some hot dogs and steak.

The day was winding down to an end with campfire slowly dying as myself and my daughter sit in our camp chairs gazing up at the stars. To our luck, this was peak season for meteorites and in 20 minutes we saw at least 10 shootings stars each.

We climbed into bed, the end of a great day.

Until around 3 am when I awoke to go to the bathroom, the moon was out and massive. I awoke the kids one final time to sit outside and use the telescope to look at the moon. What an amazing site, I could actually see the ridges on top of mountains on the moon.

Hidden Caves at Lion’s Head, and Sunken Ships in Tobermory

Saturday in Lion’s Head was met with the first local secrets of our trip being revealed to us.

The first of its secrets were revealed to us when I found that there was a >1KM loop along the Bruce Trail just at the end of Bruin St. 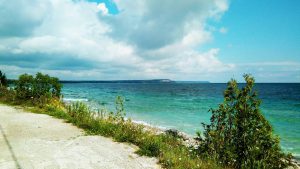 Our search for the loop had us lost, and we ended up staying on the main trail which leads from Bruin St to Chetwynd Ln, the only downside of this beautiful trail is it is next to inaccessible private beaches. However, when we started on the path there are a few no-camping signs and just in the distance, we found some wonderful caves.

With broken glass strewn about the caves, these are no secret. But they are also not on any attraction map or talked about by the locals.  I’m not sure if the reason is to keep people off the trail or to send them over to nearby Greig’s Caves instead where you have to pay to see some caves.

The afternoon called for a drive further north to Tobermory, as at 4 PM the large vessels are not allowed in Big Tub Harber any further making it safer for swimmers and snorkelers to make their way to the Sweepstakes, a local shipwreck. 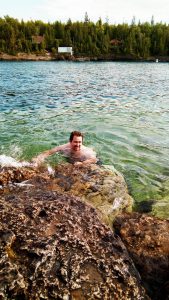 My Adventurous daughter swam out to see the Sweepstakes with good friends. The boat itself is only 10 ft deep and about 50 yards out. The problem again is most of the beach is, is private which forces most people to buy the tickets for the glass bottom boat. This did not stop us from swimming the 680 meters from the lighthouse to the ship, and then back.

I am not the best of swimmers so I swam the lighthouse with my son.  We’ve had lots of practice swimming in cold water and the 20c/68f water at Tobermory was gorgeous.

As someone with a fear of heights snorkeling the lighthouse is very scary, as the water is extremely clear. I jumped into the water and stayed in an area where the rockiness only about 10 feet deep. Then with a small kick, i slowly floated over the edge to see the immense drop below.  This is a must try for anyone in the area.

The evening left us back at camp warming up by the campfire and searching for the Bayside Astronomy (sadly not run during our entire week there). 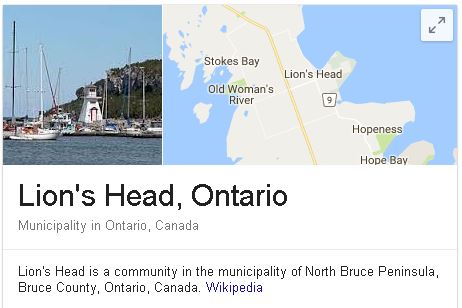 This year’s trip with me and the kids was spent up in Lion’s Head, Ontario. Our goal was to explore, hike and swim and we did just that.

Our three-hour drive north pulling our Coleman Fleetwood Taos was uneventful and easy to push in place. Yes push in place, I cannot back that trailer up to save my life. Luckily the Taos was the smallest of the models and I can easily move it by hand myself.

We settled into our campground overlooking Lion’s Head Harbor (Isthmus Bay) right next to the Bruce Trail; it meant a lot of foot traffic but the view was great and the people at the Park were super friendly.

I’ve been told not to tell anyone on how great of a place Lion’s Head is, repeatedly; So I won’t.

Even getting booked at the trailer park itself seems to be secretive as it has no official name beyond the Lion’s Head Marina. And that is exactly who you need to call for a site. 519 793 4060 for $45/night serviced. Even after calling that number you will be directed to a few different extensions but the hide and seek is worth it, these sites are a perfect temporary home for exploring the Bruce Pinusula.

Visitors Be Warned as the park is 95% super friendly permanent visitors. Sometimes are never available even though they are unused, and sometimes sites are reported as booked but never used. We had good friends wanting to stay an extra two days, yet their site was never filled and they were told it was.

Being late by the time w 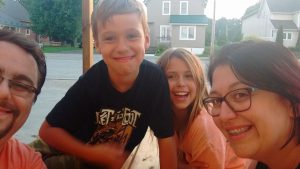 e got in and setup we did not want to mess around with dinner, so we went into town (a mere 5-minute walk) to Cindy Lou’s Ice Cream and More for some Local Fish and ice cream. I am pretty picky when it comes to ice cream so $18 for 4 people single scoop was a bit over my head. But the fish was fantastic and worth a second visit.

However, with the day spent (having worked all day before driving the three hours), there wasn’t much left for us to do except enjoy the night sky and go to bed.